The Cheerios are the cheerleading squad of McKinley High. Coached by Sue Sylvester.

The four captains they have had along the series are Brittany Pierce to Kitty Wilde to Becky Jackson to Bree Holbrook. They have won multiple competitions and awards, including six consecutive Regional and National Championships, and placed third at the International Championship in North Korea. They lost in 2011, at the Regional Competition because Quinn, Santana, and Brittany quit just before the departure. Its members are considered the most popular and pretty girls of the school.

In 1986, Sue joins the McKinley faculty as the new cheerleading coach. After being accused of looking 'too feminine', she cuts her hair and adopts wearing tracksuits to look more intimidating.

In 1990, Terri Del Monico, (then called Terri Del Monico) joins William McKinley High School, and is made head cheerio in around 1993 before graduating the following year.

Through her entire freshman year (2008-2009), Quinn is the head cheerleader. It's known that they won all their cheerleading competitions. In the yearbook from the freshman year (seen in "Glee") there are pictures of Quinn, Santana, Brittany, and Sue.

The Cheerios perform at the beginning of the episode the song Piece of Me with Brittany as their lead. Sue classifies the performance as "garbage" and, thanks to her low grades, kicks Brittany out of the team, giving Kitty her position as Head Cheerio.

Sue Coach and Former Co-Coach. Hired prior to New York State of Mind (1986). 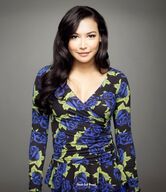 Santana: Former Co-Captain and Captain. Joins and Graduates prior to New York State of Mind. Rejoins in Hold Back.
==Former Members==

Roz: Former Co-Coach. Hired in and Fired prior to New York State of Mind.

Retrieved from "https://adams-lindsey-productions.fandom.com/wiki/Cheerios?oldid=4196"
Community content is available under CC-BY-SA unless otherwise noted.